The Internet's Impact On the Way We Communicate

How has the internet changed how communication works? What is the difference between instant messaging and online conversation? Let's find out more about The Internet's Impact On the Way We Communicate. 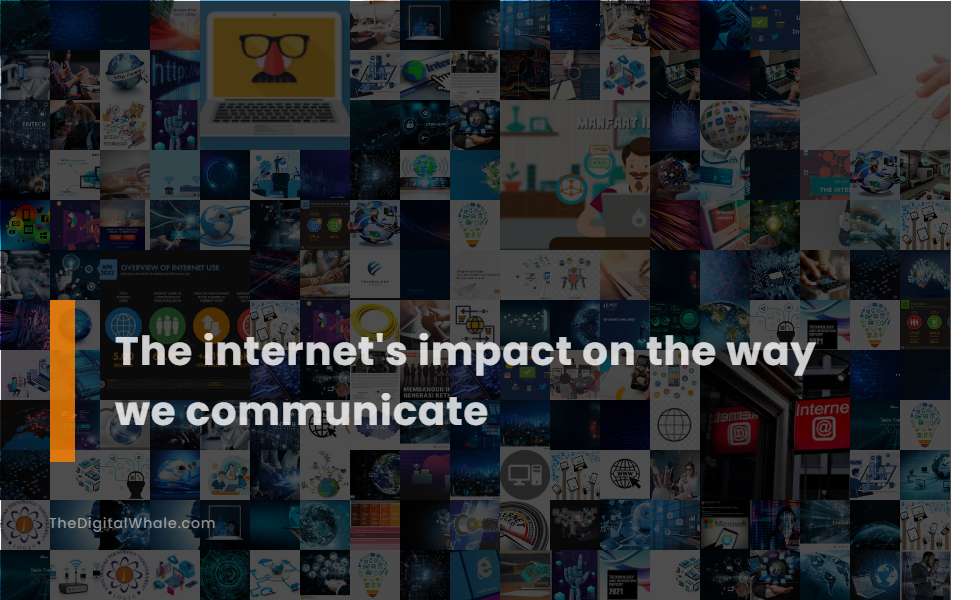 How has the internet changed how communication works?

Internet has changed the way we communicate and it has done so in a way that is shaping our generation into one so unique from generations past. For one, the instantaneous way that we share information has made it easier for us to learn and support each other. Additionally, the sharing of pictures and videos allows us to connect with each other in a way that is faster than ever before. However, while the internet has changed how we communicate, it also has led to some challenges. For example, there have been moments where it has been difficult for people to understand each other because of differences in language skills. Additionally, the use of social media can be harmful if used improperly.

Without the internet, communication would be more indirect and limited. For example, if I wanted to learn about a new topic, I wouldresearch it and then write a letter or article outlining my findings in as clear, concise, and easy to read a way as possible. Then, I would share this information with my friends and family.

What is the difference between instant messaging and online conversation?

Internet has changed the way humans communicate by allowing for a more public and interactive way to interact with others. This has allowed for a more sophisticated conversation, where both individuals and groups are able to represent themselves better. Walther's studies have shown that through an online conversation, the users experience a whole new approach to communicating. Due to the increased lapse of time between messages, people can more fully think out what they want to say, and how like portray themselves. This gives users more control over the conversation, and allows it to be more engaging for both parties involved.

One of the main benefits to using the Internet for communication is that it allows people to communicate with each other in a shortened amount of time. This makes it easier for both parties to have a clear conversation and allows for a more meaningful interaction. Additionally, internet users have been shown to be more sensitive and adjusted when communicating by using online tools. This ensures that everyone around them is treated fairly and that any potential conflicts or disagreements are discussed before they arise.

How did the Internet change the way we communicate?

Related:
What are three ways in which digital distractions can interfere with tasks? Can I use my digital desk to break from technology and have a distraction-free time? Let's find out more about How To Manage Digital Distractions.

Some challenges we've faced in communication for decades include Race to the Top, developed by the United States Department of Commerce in the 1990s, which mandated that states provide faster internet connections to schools and businesses. Additionally, Duchâtel's Challenge of the Century called for new ways to communicate with patients and doctors. The development of chatbots and artificial intelligence has made it easier for us to exchange information without having to speak or use traditional methods.

What are some of the ways in which the Internet has affected our lives?

More and more people are working from home and there are now many ways for parents to communicate with their children whether it be through chat, video chat, e-mail, or even instant messaging service. This means that there is now a new way of communicating with children which is mediated by technology.

What are some of the advantages of the internet for global mass communication?

Internet has had a significant impact on the ability of people to connect and communicate globally. This has been evident in many ways, from the rise in social media to the rise of global trade. However, at the same time, there are some disadvantages to the internet that can be studied. One such disadvantage is its ability to create isolation between people. Additionally, it can have a negative effect on communication skills, leading to a decrease in understanding and empathy.

The internet has allowed people to communicate with each other more easily and directly than ever before. It has also made it possible for people to connect with a wider variety of cultures and events, which has helped to foster closer international relationships. However, the internet can also be bad news in some ways. For example, it can create barriers to communication between different countries and groups, which can lead to conflict.

What are some of the benefits of using the internet for communication?

Internet has helped to open up communication between people by providing multiple channels for people to share their ideas. This has allowed for more ideas to grow and lead to new generation of knowledge. Additionally, the internet has made it easier for people to sum up their ideas in a concise manner so they can be moreprintfied.

The first place we encounter information on the internet is through books, movies, and newspapers. These sources of information provide eyewitness accounts and objective insights into current events and issues. However, the internet hasopened up a new area of communication where people can communicate with each other without any intermediaries. Thisnew medium has given us a generation of educated people who can argue and discuss ideas with each other on an unprecedented scale.

Previously, it was difficult to have an intelligent conversation with someone who was not familiar with your topic. On the internet, you can easily find people who share your interests and have easy access to650 million topics to argue about. Because this new medium has given us so many opportunities to argue about ideas, we've seen a rise in intellectual property theft.

Related:
Which of the following best describes how a company should run its online reputation management program? What do you think is the most important thing to do when managing your online reputation? Let's find out more about Tips for Managing Your Online Reputation.

What is the Internet and how has it changed communication?

Internet has allowed for a new way of communication that has had a favourable outcome, others believe that it had a negative impact in our society. For example, social media has allowed for more people to be connected, which can have a positive or negative effect depending on the individual.

However, there is also a downside to the internet, as has been pointed out by some individuals. Namely, that it has taken away the ability for people to interact face-to-face. Additionally, this has led to a decrease in the amount of communication that takes place between people who are important to them.

How can technology impact the way we communicate?

Impact of technology on the way we communicate has definitely been a topic of debate for some time now. The use of technology has definitely changed the way we communicate and the limitations that it place on our ability to do so. For example, social media has allowed individuals to quickly and easily communicate with one another, while also providing access to a wealth of information. However, this can have its own limitations. For example, it can be difficult to maintain a false persona when using social media platforms. This can be tough since people are used to seeing people with their own particular characteristics. Additionally, social media platforms can be fleeting and often don't last as long as they might want them too. These limitations may lead to people longing for traditional forms of communication, like face-to-face conversation or writing.

Technology and the tools it provides facilitate communication, whether it's physically or electronically. With technology bull riding online, for example, those who are more skilled in communication will likely win the race. The other person will then be more likely to him- or herself and their thoughts (or lack thereof) to be noticed.

Is it harmful for people to use technology to communicate more than they need to?

Article discusses how technology has made people smarter and helped to change communication. For example, electronic devices like computers have made executives more literate, which in turn has impacts on the way we communicate and share information.

"It has also made us more aware of our surroundings," she said. "As we move through our day, we become more reliant on technology as a tool to help us identify potential risks and opportunities. That's why, I believe, there is a danger that technology can become a hindrance in communication. "

But in this case, the danger seems to be that technology can help us communicate better, but at the price of dumbing down the way we do it. If someone is less effective at communication because they use technology instead of intuition or common sense, then that person is at risk for deficiencies in their ability to manage their own personal and professional relationships.

What is the impact of the internet on culture?

Internet has had a huge impact on culture, specifically through its ability to speed up the production process of television shows. This has created a more common patterns in how shows are made, which in turn hasinos changed the way our society consumes television.

Now,Many shows are made without any warning so that viewers can't wait to see what is going to happen next. Additionally, viewers can now "skip" commercials by using "binge watch" mode, meaning that they consume a lot of television without interruption.

Reviewed & Published by Albert
Submitted by our contributor
Technology Category
Albert is an expert in internet marketing, has unquestionable leadership skills, and is currently the editor of this website's contributors and writer.
‹ Prev
The Importance of Online Privacy
Next ›
How To Manage Digital Distractions
Technology Category
How To Manage Screen Time for Healthy Teenager Development

How much time do pre-teens spend watching screens? How much screen time is too much for a child? Let's find out more about How To Manage Screen Time for Healthy Teenager Development.

What Is the Future of Digital Life?

What are the potential risks and potential benefits of a global digital society? What is your favorite thing about living in the digital age? Let's find out more about What Is the Future of Digital Life?.

How To Be A Responsible Digital Citizen

Working Remotely: the Pros and Cons

Cyberbullying and Its Impact On Teenagers